Straight best mates Cameron Thomas and Sunny Matthews have known each other for years, but rarely seen each other naked, let alone had a mutual wank together! But today is a day of firsts and these two have a lot of nervous banter as they feel each other’s muscles and compare bodies! They have fun stripping their friend naked and getting themselves to big floppy semis and then throbbing hard erections as they sit on the stools naked with only their white football socks on flexing their muscles. The boys were feeling adventurous today as they agree to let me oil their cocks and wank them simultaneously, and wow, they both had rock hard-ons! Cameron gets to climax first and squirts his load and we film him showering while Sunny continues wanking and by the time I return he is firing cum all over himself! Both lads shower off and Cameron even manages to piss on camera! 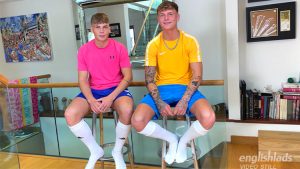 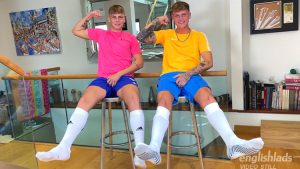 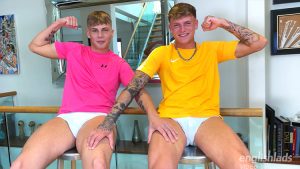 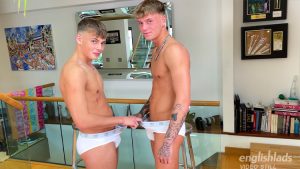 see even more at ENGLISHLADS